To understand just how a Japanese watch brand that populates several pages of every Argos catalogue manages to command the respect of the notoriously snobbish watch community, every Swiss CEO worth their salt, and in turn manages to make the SKX007 in question here for such a ridiculously low price point, we refer you to Seiko’s abiding motto: “One step ahead of the rest.”

Well, the brand certainly was ahead of the game with the SKX007 diving watch – released in 1996 – and it seems the rest of the industry is still playing catch up. It’s perhaps the best value automatic watch on the market today, and continually challenges watches ten times its price in terms of its functionality, stylishly simple design and top build quality. If you’re looking for a rugged mechanical watch with real pedigree that you can wear every day, this may well be all you need.

The product of over three decades of technological interbreeding, the SKX007 could be Seiko’s most impressive waterbaby of all, because of, rather than despite it being one of the world’s most affordable watches. For £349 (though on any given day, you’ll easily find a new one for less, e.g. here, for example) you get a bona fide, self-winding mechanical diving watch that more than meets this horological genre’s necessarily strict requirements.

In other words: 200-metre water resistance; highly legible dial luminosity; a screw-down crown protected by ‘shoulders’ and offset to 4 o’clock to free up wrist movement; plus the all-important unidirectional timing bezel, which, if you accidentally knock it, only turns anticlockwise to dictate less remaining dive time rather than (potentially lethally) more. And that’s assuming you’re someone who actually spends prolonged periods of time underwater, of course. It’s as pure a package as any self-respecting diver would want, or anyone with a vaguely physical lifestyle for that matter, who values robustness and peace of mind should any water-based activity or phenomenon confront them. A day at the beach for example, or as mad-keen members of the Seiko diving-watch cult will appreciate, a jungle monsoon. The reference. 6105, after all, was particularly famous for being worn by Captain Benjamin L. Willard – aka Martin Sheen in Apocalypse Now.

The dial itself is pure, functional minimalism, picked out in Seiko’s proprietary, famously torch-bright luminous paint. Some will take issue with the black-on-white day/date indication (pedants like date rings to match their dials, thank you very much) but we prefer it – it balances-out the lume at 9 o’clock. As for ‘DIVER’S 200m’ in red? Well, that’s as racy as it gets, adding a dash of retro flair to otherwise sober proceedings. If you go for the steel bracelet over the expanding ‘concertina’ rubber strap option, that’ll add a touch more vintage cool, but it’s a bit clicky-clacky for our liking. Stick with the rubber – it’s the professional choice and instantly adjustable, or, swap out the band for a NATO watch strap for full on military style.

It’s the simplest of watches we’re celebrating here – simplicity often being the hardest trick to pull off with wristwatches. The less that’s going on, the harder the remaining elements must work, especially given the lifelong lifespan of a well-made watch. And goodness is the SKX007 well-made. On-wrist and hands-on, the first thing you appreciate is the sheer heft of the stainless-steel case – there’s a lot of handy ballast here, machined and polished with remarkable finesse, from the gentle curve of its four lugs or ‘claws’, to the two scalloped shoulders rising to guard either side of the crown.

The gnurl of the bezel is easily gripped wearing gloves, but not jagged as to seem aggressive or overly ‘techy’. And when you do twizzle it, a surprise: the bezel clicks crisply in half-minute notches, not whole minutes as you’d forgive any mechanical diver under £350. That’s Seiko to an obsessive tee.

The Story Of The Seiko SKX007

It is a slow but steady spirit of innovation that has seen Seiko grow into the titan of watchmaking it is today – a brand boasting vast manufacturing facilities dotted throughout Japan’s mountains. A week-long Bullet Train tour is required to appreciate the sheer extent of these capabilities, and Seiko’s comprehensive self-reliance even stretches to synthesising its own quartz crystals, growing vast lozenges from ‘seed crystal’ in 14m-high autoclaves – a facility resembling the engine room of the Starship Enterprise.

Elsewhere, nestled in the snowy woods of Morioka in the north, you’ll find the appropriately named Grand Seiko, where you’d be forgiven for thinking you’d been wormholed to a Swiss watch atelier in the Jura Mountains. Right down to its 20 lab-coated watchmakers studiously tweezering together precision mechanical movements to rival any of Omega or Rolex.

Unrivalled quartz pedigree, exquisitely crafted horological masterworks… and then there are the diving watches.

Just one year after the 1964 Tokyo Olympics, while Seiko was shrinking its quartz technology to wrist size, the seed of a mighty subaquatic lineage was sown: the reference 6217. The watch face that launched a thousand rigid-hull inflatable dive boats, if you like. It was Seiko’s first diving watch, and with it the brand hit a homerun. 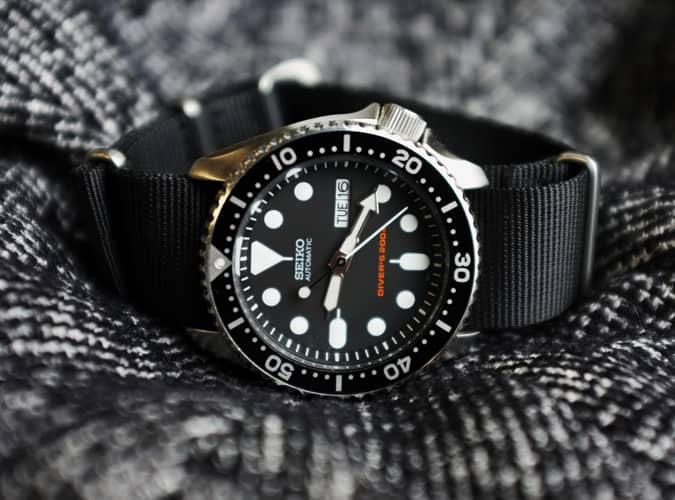 Borrowing plenty of stylistic cues from Blancpain’s Fifty Fathoms, whose super-legible luminous monochrome dial and unidirectional rotating bezel set the SCUBA-worthy standard as far back as 1953, 6217 was water-resistant to a highly respectable 150 metres down, and was naturally driven by a homegrown Seiko mechanical movement.

The SKX007 is a direct descendant of this classic debut, albeit via a panoply of variants, evolutions and sub-collections. So perfect was the 6217, and yet so frenzied has its iterative lineage become, that the SKX007, in production since 1996, is instantly understandable yet almost impossible to genetically pinpoint.

There’s yet more professional clout to SKX007’s genetic makeup, which came about remarkably early-on in Seiko’s life aquatic. Ten years after the release of its first, and after seven years of research, Seiko came up with another milestone: the world’s first diver’s watch with a titanium case – its super-tough, lightweight metal components engineered to water-resistant tolerances good to depths up to 600 metres. It was an unprecedented use of the material at the time and would mark Seiko out as big players in the diving watch world. Seiko may be averse to actual names for its individual models, rather than strings of letters and numbers, but you can rely on their fans to fix this, and always with good humour. Hence, this 1975 professional diver is now fondly known as the ‘Tuna’ – so nicknamed for its flat cylindrical case profile, resembling a can of fish.

This hockey-puck shape has been adopted across much of Seiko’s diving range ever since, including the cult ‘Orange Monster’ and ‘Black Monster’ Automatic Diver’s 200m launched in 2000. And since 2014 they’ve finally been available in the UK under the brilliantly revamped Prospex banner – an abbreviation of ‘professional specifications’, which means as well as divers, the range also boasts analogue instruments for pilots, drivers and sailors alike. Indeed, showing their own good humour, one of the gifts in the goodie bags from Seiko’s recent Knightsbridge boutique opening was a cleaning cloth contained by a tin resembling a tuna can.

Under the bonnet of the SKX007, you really do get a proper Seiko-made self-winding mechanical. The 7S26 is, admittedly, the Japanese brand’s most basic calibre, machined, finished and hand-assembled at Seiko Instruments’ Malaysian plant in Johor, near the border with Singapore.

But it’s solid as a rock, much like the rest of the SKX007. It ticks at a steady 21,600 vibrations per hour, winds incredibly efficiently thanks to Seiko’s ‘Magic Lever’ system (two ‘pawl’ levers either push or pull around the winding barrel’s ratchet wheel, whichever direction the rotor swings) and is incredibly easy and cheap to service (it even includes plastic components for things like the day and date switch-over mechanism). The only downsides to the 7S26 are that it’s non-hand-windable (not so much a problem thanks to aforementioned Magic Lever, instantly ticking things over from a cold start) and it’s non-hacking, i.e. the hands don’t stop when you pull out the crown to set the time accurately. But the latter is moot anyway, given the 7S26’s relatively poor precision.

Are you really worried about losing up to 20 seconds or gaining up to 40 seconds a day for this pricepoint? You’ll only be out by a few minutes a week, and you can still rely on the bezel to time your dive if you’re only submerged for 45 minutes or so.

A Diving Watch Of The Highest Order

Coincidentally, as well as being SKX007’s birth year, 1996 was also the year Geneva’s International Organization for Standardization signed, sealed and delivered its own verdict on what criteria a modern diver’s watch should adhere to – the ISO 6425 standard. It’s a now notorious measuring stick for the various takes, mistakes, misinterpretations and misunderstandings the chattering watch classes like to chat about, and only watches restless in the pursuit of perfection are granted it. Reliability, susceptibility to condensation, 100m minimum water resistance, thermal shock resistance, legibility, an indication things are working in total darkness (a luminous sweeping seconds hands, since you ask) – they’re all factors that must be abided by.

ISO 6425 has it all covered and its stamp of approval is eagerly sought-after. And guess what? Our humble Seiko passed the test. But best of all, for less than £349 it can be all yours.