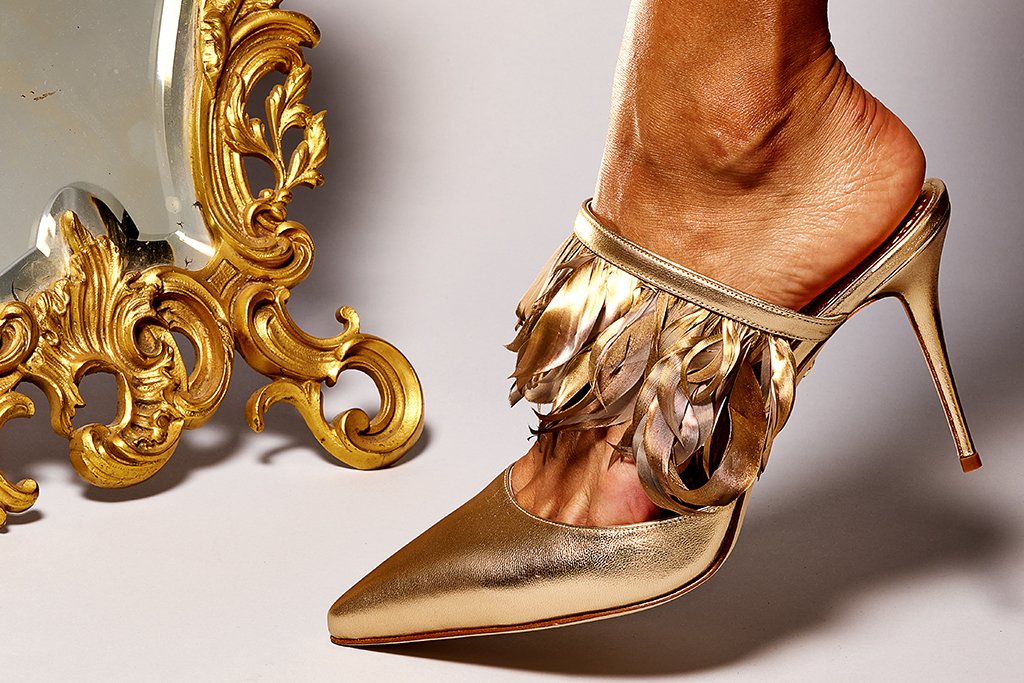 
During his 50th anniversary year, Manolo Blahnik is celebrating big — but the shoe legend finds it hard to believe it’s been five decades since he got his start.

“Everybody says the same thing, that this milestone is quite extraordinary. It seems to me like 50 days or months. I’ve been having such a divine time – bad times, too. In my mind, 50 years is a lie.”

Reflecting on the year so far, the designer talks about a new way of working during the pandemic, a huge moment with Kamala Harris, his special anniversary Gold Collection and why his new flagship on Madison Avenue is so meaningful.

While the world was on lockdown in 2020, Blahnik spent time at his homes in Bath, England and the Canary Islands.

While some rituals didn’t change — he continued to sketch every day and be entertained by his loyal dogs— others did of course. Instead of staying up past midnight in his beloved factory, the designer resorted to zoom calls with his team.

When he wasn’t working, Blahnik continued to nurture his other passions.  “I love to read. I just finished “Selected Letter of Marcel Proust,” which was totally marvelous. I am also rereading some of Gore Vidal’s books — he’s my favorite author of all time,” the designer said last year. Later in the evening, he watched old movies. “My main diet at the moment is 1930’s films, “Show Boat,” “Sin Takes a Holiday.” “I adore them.”

In January, when Kamala Harris took the oath of office as America’s first female VP — and the first Black and first South Asian person to hold the second-highest office — she turned to a tried-and-true style from her go-to footwear designer: Blahnik’s black BB Pump.

Time and again, Harris has worn Blahnik for the most important events of her career. After she and President Joe Biden were declared the winners last November, she stepped out in a nude pump for her speech.

“What a privilege to serve such a divine woman — she has incredible style, suitable for any occasion. Kamala Harris is a barrier breaker,” Blahnik told FN at the time.

“My niece Kristina saw the store, and they showed me the pictures, and I said, ‘Oh! I love that shop. I used to go there when I lived at the Westbury hotel.’ I loved the windows. The shop was hideous inside. And then this thing happened, this horrible disease, and we couldn’t work. Nobody could work there … It was the first shop I did on the internet. I did it on Zoom with a man from Paris [interior designer] David Thomas. It was finished in April or May, and we opened quickly in June.”

“As you can see I picked up old things and I did new things. The only thing I have to criticize is that I wanted bigger bells, and they couldn’t find them. But [these shoes] are very affectionate to me, because I remember my mother used to have a huge [charm bracelet] she designed herself with big chains, like an industrial kind to make the boats comes to port! She had four bells, one for my mother, one for my father, one for Evangelina and I.”

“I want this to be a space where others can learn and feel inspired to create. It’s very important to me personally, that even those who can’t buy my shoes are able to feel a connection to [us].”

For the first time ever, Blahnik fans can fully immerse themselves in his enchanting world through a virtual milestone anniversary celebration.

Five rooms focused on the themes of artisanry, artistry and family values celebrate top moments past and present.

The Palette Room focuses on his famed sketches, with new back stories. The ’70s Room goes inside the designer’s earliest days. A “Friendships” space features Diana Vreeland and Anna Piaggi, among other influential women who helped define Blahnik’s journey. The Gold Room shines a spotlight on the 50th anniversary Gold Collection. Finally, the Family room will illuminate the individuals who have worked alongside Manolo and the Blahnik family to build the business.

“I’ve only seen pictures of what is going to be, and it looks very exciting because Judith Clark [the curator] is fantastic.”