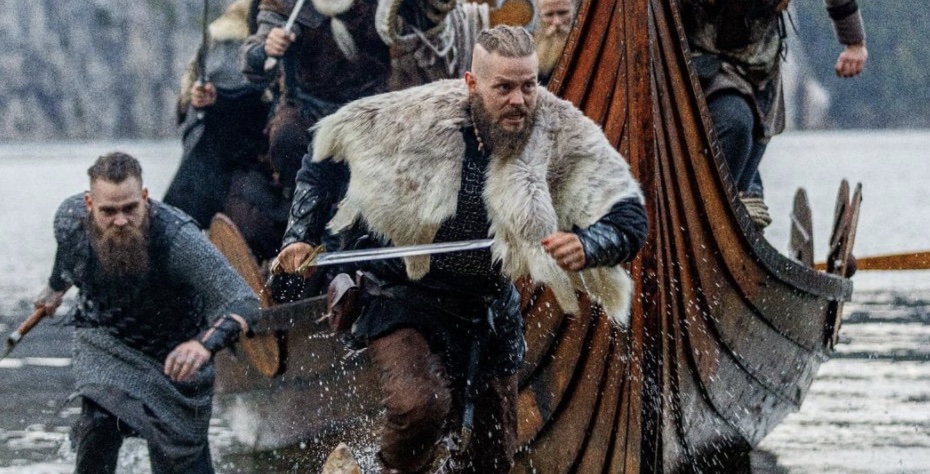 
While many men may think that the modern man bun is a recent phenomenon, it’s actually part of a much older and historical hairstyle genre. Viking hairstyles have made a significant comeback in modern times due to their range of style and rugged look.

Many men are rocking Viking hairstyles without even realizing it. Man buns, long flowing locks, or even braids all fall under classic Viking styles.

Though short hair has always been considered more professional or elegant, there is no denying that long hair is currently in style. Find your inner (or outer) Viking hairstyle here, in our top haircuts for men.

Perhaps the most traditional and foundational Viking hairstyle is the temple shave with long, flowing hair. This hairstyle can even come off a bit intimidating, making it perfect for a man looking to increase his edge and masculine appeal.

Viking man buns go exceptionally well with a temple shave with long hair. In addition to getting free-flowing strands out of the way, this hairstyle also shows off the shaved sides of the head (if you pair the two styles). Add a patterned fade to the sides rather than just a plain shave for even more detail.

From a top knot to a messy bun, a small bun with an undercut is one of our list’s more laid-back and effortless Viking hairstyles. While the undercut itself takes a steady hand and talent, once the undercut is complete, it can be shown off with total ease. Simply throw the longer hair in whatever style of bun you prefer and allow your undercut to grab some significant attention.

Adding a soft fade to your temple shave makes this Viking hairstyle all the more dynamic and zestful when compared to a cohesive shave. Thicker fade at the top creates a nice distinction between the long hair and the thinner part of the fade.

While undercuts are often beautiful and eye-catching on their own, throwing in a braided ponytail for men (or multiple) only adds to the detailing and intricacy of this Viking-inspired haircut. While you will need long hair to pull off the braided ponytail, the undercut can be as thin or thick as you prefer.

Top knots are a more contemporary take on Viking hairstyles, though they can be done in a way that embodies the fierce and confident energy that the Vikings were so well-known for. Shaving and embellishing the undercut can easily showcase a nice edge to your style.

If growing your hair out past your shoulders is simply not for you, one way to take a medium-length hairstyle to the next level is by growing out a beard. Viking hairstyles are more rugged when paired with a full beard, without having to wait months to grow out your hair.

Though it is possible to find some great short Viking hairstyles, long hair is more often associated with the traditional look. Longhair without any fades or undercuts is the true nature of the Viking style.

9. Long Hair with Half Bun

Though fades and undercuts tend to look great with buns, simply taking half of your medium or long locks and throwing them up into a messy bun creates the rugged and masculine look that Viking hairstyles attempt to showcase.

While this style can be done with longer hair, the undercut is most noticeable when paired with short hair. Simply slicking back the top part of the hair clears up the face and draws more attention to the back of the head.

No matter how kept or trimmed, long hair with a bear will always be reminiscent of the traditional Viking hairstyles.

If you fear that a top knot isn’t enough to compliment your style, consider growing out your beard to ensure that this convenient and functional hairstyle maintains a more masculine edge.

A basic buzz cut with a beard is one of the best and most popular short Viking hairstyles for men. Buzz cuts are incredibly masculine and still one of the most low-maintenance cuts you can get.

The voluminous pompadour hairstyle might not make you think of the Vikings upon first look. However, this short yet seemingly length style becomes very virile and red-blooded when paired with a high fade.

For those currently in the middle of transitioning from one of the many short Viking hairstyles into a longer, more traditional one, a short ponytail help make the awkward period easier. Opt for a low pony with a few strands framing the face for a laid-back look.

While crew cuts tend to be seen as more modern hairstyles, pairing this style with a nice undercut or fade creates a sort of Viking-like appeal with a more contemporary twist. Out of all of the short Viking-inspired hairstyles, this one is perhaps the most standard and straightforward.

Though having naturally curly hair makes it easier to embody a Viking look with little effort, adding some volume via product can also increase the quality of the style. If you don’t happen to have naturally curly hair, simply try your hand at sleeping in a couple of braids and then add some hair mousse in the morning to help the waves to keep their shape throughout the day.

Even though braided hairstyles are often seen as a more feminine style of hair, the Vikings were known to braid their long locks in various ways. From a braided ponytail to a french-style braid that starts at the top of the head, braided hair acts as a more unconventional yet unique Viking hairstyle for men.

If you’re hoping to look like a true, modern-day Viking, trying your hand at a braided Viking mohawk is sure to garner the results that you’re seeking. However, this particular hairstyle can only be accomplished with longer hair and a temple shave to truly bring out the hairstyle’s essence.

While this look certainly might not be for everyone, braided beards are the ultimate way to showcase Viking-style facial hair. In addition to being utterly unique, braided beards can also add some comfort and convenience for men looking to get their facial hair out of the way for the day.

How do you get a Viking hairstyle?

If you want to have a simple yet modern kind of Viking hairstyle, the most accessible place to start is growing out your hair and leaving the top and back long while having the sides of the head shaved. Once you have accomplished this, various Viking haircuts and styles can be done to include undercuts, braids, and multiple fades.

Why did Viking hairstyles have long hair?

Based on archeological findings, it appears as though the primary reason Vikings did not cut their hair was that they could more easily be distinguished as free men rather than enslaved people, who were understood to have very short and cropped hair due to hard labor.